» Zack Greinke and Baseball Lifers
2023/01/31 17:23 from JoeBlogs
The Kansas City Royals are announcing today that they’re bringing back Zack Greinke for the 2023 season, and I’m very happy. I don’t know how much longer Zack pitches, but he should end his career in Kansas. City. Whatever landmarks he might pass — 3,000 strikeouts, for example — he should pass in Kansas City.

» The 10 Longest Home Runs at Dodger Stadium — The Ballpark Guide
2023/01/30 19:33 from The Ballpark Guide Blog
When you think of big moments at Dodger Stadium, you might think of Kirk Gibson’s walk-off home run in Game 1 of the 1988 World Series or Fernando Valenzuela’s no-hitter in 1990. While nothing tops these moments, the stadium has served as the backdrop for many long and impressive home runs, too. In this list, […]

» A True National Treasure
2023/01/30 16:25 from Comments From Coach Mike
“Baseball is the only game you can see on the radio.” ~ Phil Hersh of the Chicago Tribune Newspaper. A happy belated 89th birthday to Mister Baseball, the inimitable Bob Uecker. He was born Robert George Uecker on January 26, 1934, in Milwaukee, Wisconsin. He was an MLB catcher, sportscaster, comedian and actor. He appeared on The Tonight Show with Johnny Carson, (who gave him his “Mr. Baseball” nickname) over 100 times (

» The Good, the Bad and the Ugly
2023/01/30 15:15 from JoeBlogs
Yesterday was NFL Championship Sunday, which means today we are left talking about the officiating. Well, the officiating and the injuries. This is simply how it goes in the modern NFL. The season is too long. The games are too chaotic. The 49ers ran out of quarterbacks. The Chiefs ran out of players to run pass patterns. Everybody, and I mean everybody, was limping. And the officials, unwillingly I suspect, helped decide who would go to the Super Bowl. It happens every year.

Business brought me to Fort Worth this past week, though a tight schedule prevented me from planning any baseball detours as part of the trip. Too bad since I’m currently working on the SABR Games story that took place in Fort Worth in 1952 and would have benefited greatly from even a few extra hours … Continue reading "The beautiful uncut hair of LaGrave"

There’s no more storied venue in the history of college basketball than the Palestra in Philadelphia, and I was privileged to make my first visit there Saturday. My friend Jerry and I drove to the University of Pennsylvania campus to watch a men’s game in which the home Quakers dominated the Harvard Crimson for an […]

» Is Novak Better Than Ever?
2023/01/29 19:36 from JoeBlogs
At least once a match these days, but often two or three or four times, Novak Djokovic does something that I can only describe as a magic trick. What happens is this: Djokovic will hit a poor shot — a short lob, a sitting duck, something that seems to set up an easy putaway for his opponent.

» Billy Packer
2023/01/28 14:21 from JoeBlogs
Forgive me for this being so personal, but I’m not sure how else to tell it. We were doing the PosCast the other day — Mike Schur, Tom Haberstroh, and I opened a bunch of random packs of old basketball cards. And as the names came up — Wayman Tisdale, Armen Gilliam, Pervis Ellison, Glenn Robinson, Xavier McDaniel, Mark Alarie, Bill Wennington — I instantly thought: Oklahoma, UNLV, Louisville, Purdue, Wichita State, Duke, St. John’s. There was a pack of

» Football 101: No. 5, Peyton Manning
2023/01/27 16:26 from JoeBlogs
Happy Friday! The Football 101 makes a triumphant return this week. Now that I’ve finished a certain book we have two essays this week! Here’s the complete archive. Thanks for reading, and thanks for subscribing! After this week we’ll continue with a new Football 101 essay every week to finish out the Top 5. And if you want to track the countdown, Brilliant Reader Ed B put together

» Football 101: No. 6, Lawrence Taylor
2023/01/26 19:01 from JoeBlogs
The Football 101 makes a triumphant return this week. Now that I’ve finished a certain book we will have two essays this week! Here’s the complete archive. Thanks for reading, and thanks for subscribing! After this week we’ll continue with a new Football 101 essay every week to finish out the Top 5. And if you want to track the countdown, Brilliant Reader Ed B put together

» The Jeff Kent Backlash
2023/01/26 14:50 from JoeBlogs
OK, let’s pop on our socials and see how people are responding to Jeff Kent falling off the Hall of Fame ballot after 10 years of not-so-near misses! Hmm. “Greatest power-hitting second baseman ever” from my pal Jon Morosi. What else we got? Wow, now he’s simply the greatest offensive second baseman of all time (or at least in the top three). OK.

This series is inspired by the must read book “All Caps, Stories That Justify an Outrageous Hat Collection” by Craig Colby. Craig wrote this book about the many caps he has and the stories behind it. Anyhow, this series will be about the caps I own and the stories behind them. In this episode of “Personal … Continue reading "Personal Stories About Ballcaps: Ogden Raptors"

» Scott Rolen and the New Hall of Fame
2023/01/25 16:14 from JoeBlogs
Well, awesome surprise, Scott Rolen DID get elected to the Hall of Fame on Tuesday night. I’ve got some thoughts about it, some of which may surprise you, but first, let’s go through the entire Hall of Fame ballot very quickly. Scott Rolen, 76.3% — Elected by five votes.

This week has a bunch of Gabagool and Moxy. Magnificent Stan is joined by the and only Beefloaf From The 108 Pod, Yumper and Svo from the Yumper and Svo at The Show Podcast, and Hot Dog King and Legend King Nom to draft from the widely acclaimed series, The Sopranos. Hear the gents go … Gabagool Or GFY Read More » The post Gabagool Or GFY appeared first on The Tainted Glove Network . 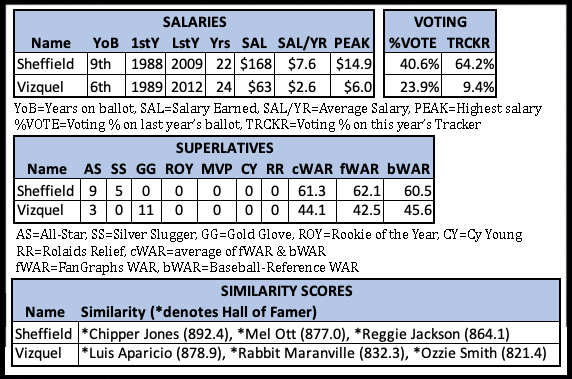 Most every baseball fan has their own personal take on the Baseball Hall of Fame ballot. They have their own standards, their own numbers to look at, their own feelings about the Hall of Fame candidacy of the eligible players. Some go more by specific statistics than by feel. There are “Big Hall” and “Small […] The post <strong>Hall of Fame Ballot through Salaries, Superlatives, and Similarity Scores</strong> appeared first on Off The Bench .

» It's Hall of Fame Day!
2023/01/24 18:21 from JoeBlogs
OK, my book is in, my slate is relatively clear, our PosCast ALS Fundraiser is going smashingly, I just got some new unopened baseball and basketball card wax packs for the next two PosCasts, and it’s Baseball Hall of Fame Day. What could possibly be better?

The 2023 Baseball Hall of Fame Ballot is filled with talented players who spent at least a decade playing on a Major League diamond. The election results will be announced tomorrow, January 24th. As is tradition, The Winning Run has filled out its own officially unofficial ballot. We have been writing about baseball for more […]

» I Finished Why We Love Baseball!
2023/01/23 17:33 from JoeBlogs
OK, I just sent a final draft of WHY WE LOVE BASEBALL to the publisher. I can breathe again. Obviously, there will be plenty of things to do from here but the real work should be done now. Yesterday, the final day, I added something to the introduction that I want to share with you. See, I’m absolutely in love with this book. I’ve loved every one of my books for various reasons, but there’s a joy with this one that, I have to say, is just a little bit different from all the others.

This series is inspired by the must read book “All Caps, Stories That Justify an Outrageous Hat Collection”by Craig Colby. Craig wrote this book about the many caps he has and the stories behind it. Anyhow, this series will be about the caps I own and the stories behind them. In this episode of “Personal Stories … Continue reading "Personal Stories About Ballcaps: Sofia Blues"

» Remembering Sal Bando and the shortest interview in sportswriting history
2023/01/22 00:00 from The Ball Caps Blog
I was saddened to learn today that Sal Bando, one of the mainstays in the great success of the Oakland A’s in the 1970s, died Friday. I watched Bando a lot on television during those great A’s years, and I also got to see him play late in his career when he came over to […]

» The 10 Longest Home Runs at Oracle Park — The Ballpark Guide
2023/01/20 16:57 from The Ballpark Guide Blog
San Francisco’s Oracle Park is widely considered one of the finest facilities in all of baseball, thanks to its stylish design, its location adjacent to San Francisco bay and its garlic fries. Talk to any serious baseball traveler, and there’s a good chance that this park is among their favorites. In this list, we’re counting […]

Baseball books come in many different forms. There are biographies, historical retellings, analytical analysis, and then there is The Bad Guys Won. It reads like the combination of a police blotter and championship highlight reel. Based on the talent accumulated on the 1986 New York Mets it came as no surprise that they became World […] 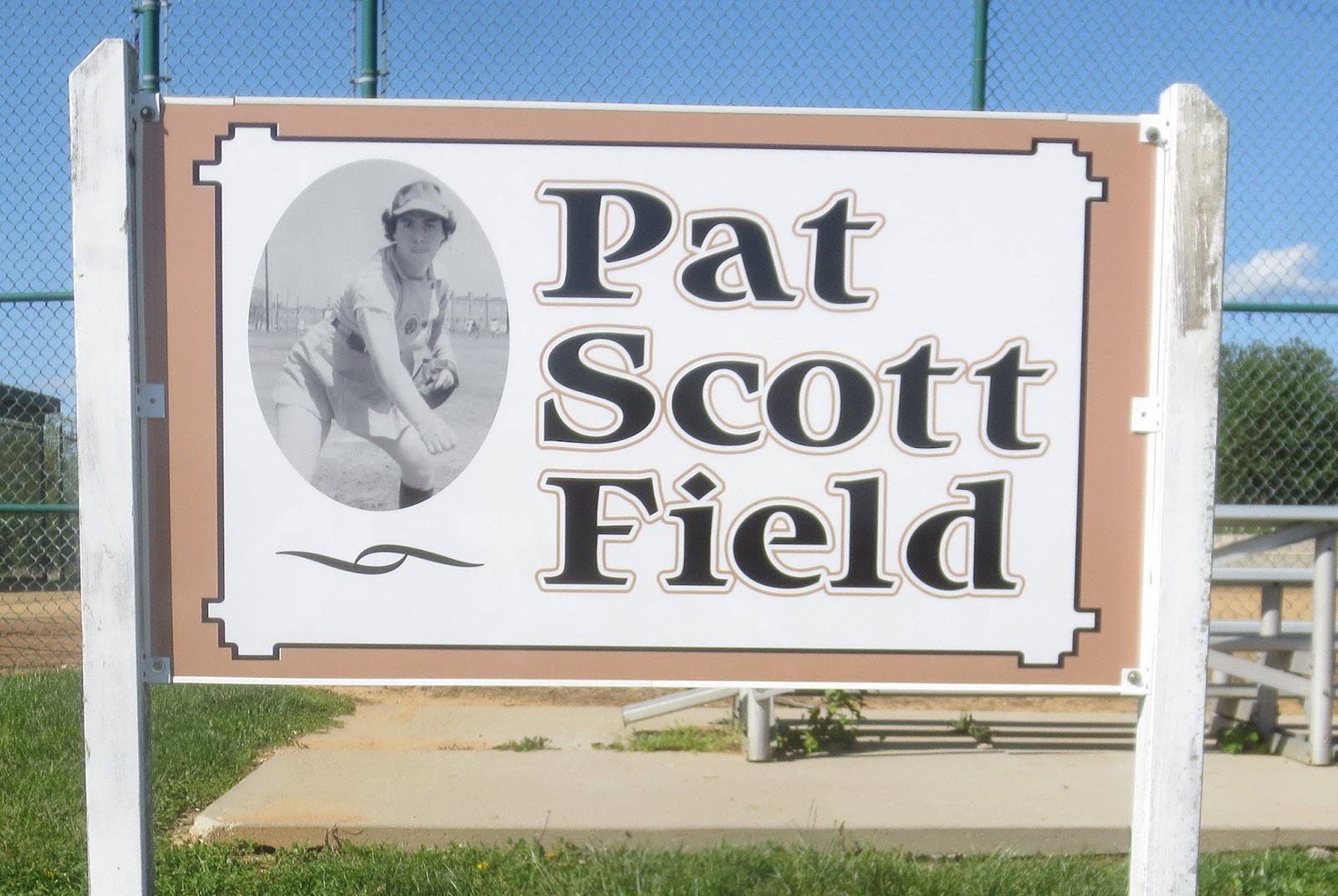 The Greater Cincinnati region has been home to many outstanding baseball players – men and women – for decades. Any baseball fan’s visit to the area is likely to include stops at the Crosley Field marker, Great American Ball Park, and the Cincinnati Reds Hall of Fame and Museum. Across the Ohio River, however, fans … Continue reading "Northern Kentucky’s Mound Ace, Pat Scott"

» I Got a Cory Snyder Rookie Card!
2023/01/19 14:57 from JoeBlogs
Yes, I know what you’re saying to yourself. You’re saying: Hey, Joe is writing about Cory Snyder or something … he must be done with this book he keeps talking about. Yeah, you would think so. But, no, I’m not done with it. I’m still at least a good two days’ work away from finishing. I absolutely should be working on the book right now.